Concentric rubber lined butterfly valve is a kind of valve with thick polymer lining on the body and disc. The lining makes the body completely isolate from medium and provides excellent anti-corrosive performance. It designs as a device to shut-off or regulate the working medium flow and installs in pipelines or vessels with medium of acid, alkali, salt and oxidant, reducing agent, organic solvent in chemical, petroleum, pharmacy, food, iron and steel smelting, paper making, water power plant etc. It can be served as gate valve, globe valves as well as other shutting off or regulating valves.

For this concentric butterfly valves, the center of disc sealing and the center of the shaft is coincident, for a certain amount of magnitude of interference, the sealed pressure ratio between the body seat and the disc sealing surface is created to make sure the good sealing performance of the valve.The seat of this concentric butterfly valve is elastic material such as rubber or Teflon material, and its usually used for low pressure pipeline. 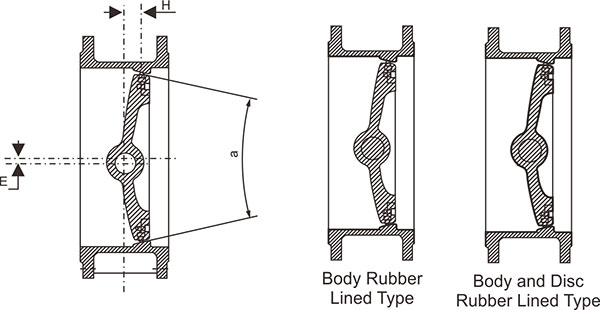 Due to the double eccentric construction, in the process of opening, the disc of the valve get away from the seat gradually, the friction between the sealing surface is reduced, so that the service life is prolonged.

As the latest technology achievement, triple eccentric butterfly valves provide a variety of connections to meet different face to face dimensions, such as wafer type, lug type, flanged type, ring-joint type, butt-welded type and jacketed type. It is suitable for acid, alkali and other corrosive medium at both high and low temperature due to wide material selection. Especially in large-diameter butterfly valve, it is continuously replacing the shut-off valves such as gate valve and ball valve with its advantage of zero leakage; meanwhile it is also continuously replacing the regulating valves such as globe valve with its excellent performance in regulation and control.

1. High performance triple eccentric patented sealing system.
– Laminated seat valve :Zero leakage sealing in bi-directional (As per DIN class I or ANSI Class VI).
– Integral seat valve: Bi-directional tight sealing ( As per ANSI Class V)
2. Excellent isolation and control function for gas and liquid.
3. Welded stainless steel or stellite body seat is specially designed for long service life.
4. No friction, wear and stagnation on the seat during the opening and closing.(Compression only)
5. The seal ring is easy to be replaced and adjusted.
6. Applicable to harsh working condition such as high temperature, high pressure and corrosive conditions.
7. The metal to metal seal ring is suitable for +600°C.
8. Self-compensating for temperature variances.
9. Low operation torque and reliable shut off torque.
10. Natural fire safe design.
11. The disc sealing ring compress along the circumference uniformly just as the effect of welding, to make the seal ring bend as spring. The resilient seal make sure the sealing performance is compliance with API 598 standard – Zero leakage for liquid or gas of the resilient seat valves. The resiliency of the seal makes the disc remain closing tight seal in the thermal cycle just as shown in below figure.

The Principe of Triple Eccentric

Eccentric 1: The shaft is placed behind the seat center line, so that the sealing ring can close

so that it can be avoid the interference of valve opening and closing.
Eccentric 3: Seat cone axis is deviated from the centerline of the valve shaft, so the friction can be eliminated during the closing and opening process, and realizes the uniform compression sealing around the entire seat.

Seating force is generated by the torque during closing and works uniformly around the entire circumference. The resilient seal flexes and keeps the original shape of the valve seat. Compression force works uniformly along the circumference to realize two-way tightness shut off . The elasticity of the seal allows the valve body and disc to be contacted or expanded to avoid the risk of blockage due to temperature fluctuations. This sealing construction is able to be adjusted and aligned by itself.

There Are Various Sealing Construction To Meet Different Requirements.

1. Normal Type: The laminated sealing ring is fixed to the disc, easy to be replaced and adjusted, suitable for most of working condition.

3. Replaceable seat type: Both the seat on body and the sealing ring on disc can be replaceable, its easy to be repaired and replaced, the maintenance cost is reduced.

High performance butterfly valve, for the eccentric construction of the disc and the sealing ring ,the valve has a compact construction, small volume, light weight, reliable sealing, long service life and other feature, and it has both regulating and shut-off function. This kind of valve is widely used for cutting off the medium such as air ,water, sewage, oil, liquid, gas, natural gas and steam or controlling the pressure and flow in metallurgy, chemical industry, electric power, textile, food, medicine, paper and other departments of industrial, municipal engineering, water plant and other pipelines.
This series products are divided into PTFE seat and PTFE + metal seat sealing constructions, both of them are zero leakage in pressure testing. The flow characteristic of this kind of valve is approximate equal percentage.

1. High performance regulating and shut off function, it not only can be used as regulating valve, but also can be used as shut off valve.
2. Excellent isolation function for gas and liquid and control characteristics of flow.
3. Small friction, no binding on the seat during the opening and closing, long service life.
4. The sealing ring is easy to be replaced and adjusted.
5. Small operation torque and reliable torque to shut off.
6. Fire safe type can be designed according to customers requirement.

For the double eccentric construction, during the opening, the disc get away from the seat gradually, the friction between the sealing surface is reduced, so that the service life is prolonged. The seat is lip type, and the material is PTFE, RPTFE or other Ultra-high molecular weight polyethylene, so that regardless of the direction of the fluid, the seat always can return to the original position after deformation to guarantee the seal performance. 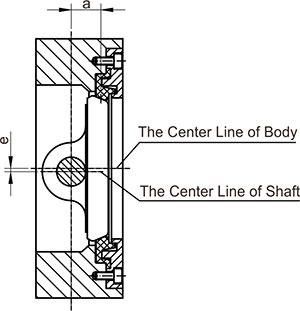 Eccentric 2: a- The eccentric between the center line of shaft and the center of the seat sealing surface.